You never know what you'll find when you renovate a school. 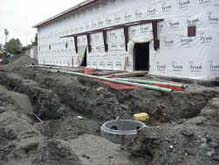 In late August of 2000, construction crews unearthed a tusk while doing excavation near the site of the new Lakeview Gymnasium. Scientists and the press were alerted and quickly visited the site to examine the tusk and the site where it was found. An archaeologist and a team of geologists made preliminary reports to Lakeview indicating that the tusk was from a Proboscidean, the class of animals including elephants, mammoths and mastodons.

Bax Barton, a Quaternary specialist in geological sciences, and Paul Kester, a graduate student working at the Burke Museum at the University of Washington, began research to determine whether the tusk was from a mammoth or a mastodon. Their research focused on three items:

What is a Schreger angle?
Schreger angles are seen in cross-sections of Proboscidean tusks. An angle of 105 degrees or less indicates mammoth. 110 degrees or greater favors mastodon. After examination, Bax and Paul's data showed the tusk has Shreger angles of less than 105 degrees, indicating it is from a mammoth.

Sediments Associated with the Tusk
The tusk was found in a layer of clay, which included diatoms, vegetation and pollen. Above that was a peat layer, which included pollen and vegetation, and above that a layer of sand that included insects, seeds and pollen. Construction fill covered the sand layer. Organic material found in the peat layer, including pollen, gives us a glimpse into the climate and landscape during the time of the Lakeview Mammoth. While this data is preliminary, it indicates a wetland environment, most likely the shore of Lake Washington some 19,250 years ago. The climate during this time was apparently cooler and drier than present day Kirkland. The terminus of glacial ice was at approximately Bellingham. The plants found in the peat layer, based on pollen analysis, included: pine, spruce, juniper, birch, willow, birch, alder, composite family, rose family, grasses, rushes and sedges.

What Kind of Mammoth is this?
While we know that the Lakeview Tusk is from a mammoth. Current information indicates that the mammoth is most likely a Columbian Mammoth, not to be confused with a Woolly Mammoth, which is a different species.

What do we know about Columbian mammoths?

The Columbian Mammoth (Mammuthus columbi) migrated into North America from Asia about 2 million years ago (late Pliocene to Late Pleistoncene periods). These mammoths stood over 13 feet tall and weighed around 10,000 lbs. Their diet consisted of mostly grass, but also leaves. The Columbian Mammoth was larger, but less hairy, than the wooly mammoth which lived near the ice sheets in the northern end of the continent. The mammoth became extinct about 11,000 years ago - about the same time the first humans migrated into North America.

Age of the Tusk
Radiocarbon dating of the tusk, provided by Lawrence Livermore Laboratories in Berkeley, California, in November of 2000, dates the tusk at 16,550 years. This correlates to approximately 19,250 years before present.

Ice Age Summary
The Pleistocene era began 1.8 million years ago. There were as many as six advances of glacial ice into the Puget Sound region between the beginning of the Pleistocene and the end of the last ice age some 13,500 years ago. It is currently believed that the Lakeview Tusk is approximately 19,250 years old. Wow, that's old!

Did you Know?
The Washington state fossil is the Columbian mammoth, Mammuthus columbi. Mammoths and mastodons lived in Washington until approximately 10,000 years ago. Mammoth fossils have been found throughout western Washington. There have also been occasional discoveries in central and eastern Washington.